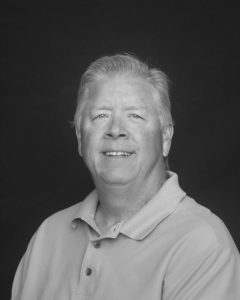 Bob Godfrey has been a music educator for over 40 years. During that span, he has found time to continue performing and has appeared in operas and musicals in North Eastern Ohio, including a number of professional roles in Cleveland Opera productions at the State Theatre in Playhouse Square. Mr. Godfrey has been a featured baritone soloist for productions of Handel’s Messiah in Painesville and Ashtabula, and at Kent State University and Heidelberg College, his alma maters. In addition, he has recorded two Gilbert and Sullivan operettas on compact disc. In recent years, Mr. Godfrey has been heard on radio performances of “The Mighty Wurlitzer Radio Hour,” which aired on WCLV (and WCLV.com) in the Cleveland area and now can been seen on youtube. In the summer of 2013, he originated the role of Alan Jablonski in the world premiere musical Tuning In at E.J. Thomas Hall in Akron, Ohio. His favorite musical theater roles include the title role in Sondheim’s Sweeney Todd, Nathan Detroit (Guys and Dolls), Reverend Shaw Moore (Footloose), Harry/Baptista (Kiss Me Kate), Harold Hill (The Music Man), Cervantes/Don Quixote (Man of La Mancha), Father(Children of Eden), Archibald Craven (Secret Garden), and his favorite, Tevye (Fiddler on the Roof). He retired 10 years ago from teaching public school vocal music, and now enjoys teaching private voice lessons in Lake County.