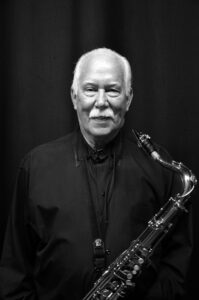 Over the years, Ed Michaels has established himself as a strong voice in the field of music education and saxophone performance.  He is well known for his leadership in directing the annual Lakeland Community College Jazz Festival; directing Lakeland’s all-star high school jazz ensemble – Jazz Impact; and most recently serving as interim director of Lakeland’s Civic Jazz Orchestra. Mr. Michaels earned his Bachelor of Science Degree in Music Education from Duquesne University, in his native Pittsburgh, PA.; and a Master of Music Degree from Northwestern University, in Evanston, IL., where he studied saxophone with the legendary Dr. Fred Hemke.  Ed studied improvisation with Phil Rizzo, a clinician for the Stan Kenton Jazz Orchestra. As a tenor saxophonist, Ed is often heard performing with the top musicians of Northeast Ohio, among them, some of his former students.  He has recorded a CD as leader, entitled Going Beyond on the Nice Jazz Label.  The list of musicians with whom Ed has performed include Phil Woods; Donald Byrd; Pacquito D’Rivera; Bobby Sanabria; and Clarence Cleamons.  His quartet has played extended engagements at the Century Room of Cleveland’s prestigious Ritz-Carlton Hotel, the Grille Room of downtown Cleveland’s Embassy Suites Hotel, Cleveland’s Fat Fish Blue, and Club Isabella.  Whatever the venue, Ed feels a strong commitment to promoting jazz and American music; and this can especially be seen in Ed’s love for both teaching and playing.