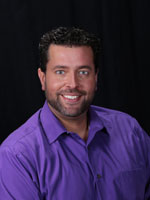 David began his relationship with The Fine Arts Association in 1983 as a violin student of Dr. Carol Linsenmeier. His interest and fondness of theatre began and developed while a member of the Youth Orchestra between 1990-92. In December of ’93, he appeared in his first production, Babes in Toyland. David continued his theatrical and musical training at FAA until he graduated from Notre Dame Cathedral Latin School in 1998.

A professional actor and director, David earned his BA in Theatre with Minors in English and Philosophy at Ashland University. He has been acting for twenty-five years and been teaching for eleven. David’s previous directing credits at FAA include Willy Wonka, Doctor Dolittle, Alice in Wonderland, The Lion, The Witch and The Wardrobe, Disney’s The Little Mermaid Jr., My Way, Kiss Me, Kate, and Xanadu. He has directed at other area theatres including Almost, Maine, God of Carnage and The Maltese Bodkin (Chagrin Valley Little Theatre), Of Mice and Men (Geauga Lyric Theatre Guild), An Evening of David Ives and #MyLife (co-directed with Sandy Kosovich Peck at South High School).

David runs the Theatre program at Notre Dame Elementary as well as The Breckenridge Village Players. He is also a Baritone with the North Coast Men’s Chorus. Some of David’s favorite acting credits include The Sound of Music (Captain Von Trapp), The Life and Adventures of Nicholas Nickleby (Wackford Squeers/Mulberry Hawk), Doubt: A Parable (Father Flynn), Frost/Nixon (David Frost) at Rabbit Run Theatre, Cats (Munkustrap) at GLTG and A Tuna Christmas (11 roles) at CVLT. David has directed, stage-managed and performed at many local theatres including, FAA, CVLT, GLTG, The Beck Center for the Arts, the Jewish Community Center, and the Cleveland Play House.