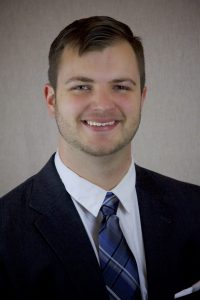 Ryan Kearns holds a Master of Music degree from the Eastman School of Music, where he studied with Juliana Athayde, Concertmaster of the Rochester Philharmonic Orchestra. Ryan also studied with Peter Otto, First Associate Concertmaster of the Cleveland Orchestra, during his undergraduate violin performance degree at Cleveland State University. Recently appointed the Manager of Development at The Fine Arts Association, Ryan is excited and grateful to join the team and is looking forward to building relationships and serving the organization through fundraising activities, such as grant writing, the annual fund, special events, and so much more. Prior to his role at The Fine Arts Association, Ryan served as the Development Associate at Rainey Institute and held internships with the Rochester Philharmonic Orchestra and the Society for Chamber Music in Rochester.

As a “Fine Arts Association Kid,” Ryan began taking violin lessons with his aunt, Lauren Godfrey, at the age of 5 and participated in a wide variety of Suzuki classes and performances. Now an active freelance violinist, Ryan regularly performs in the violin section of the Mansfield Symphony and as a substitute with the Canton Symphony, Erie Philharmonic, and Firelands Symphony. During the summer of 2019, Ryan performed in the Blossom Festival Orchestra and has enjoyed performing in other notable venues such as Lincoln Center’s Alice Tully Hall.

Committed to community engagement, he collaborates in his home state of Ohio as an instructor, clinician, and guest performer. Ryan received the highly selective Arts Leadership Certificate, an Institute for Music Leadership program that provides mentorship and resources for musicians interested in entrepreneurship, arts advocacy, and audience engagement. Ryan is an advocate for the composers and musicians affected by the World Wars, promoting and performing the solo and chamber music works of Bacewicz, Ullmann, and Weinberg.