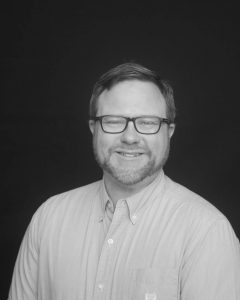 Dr. Saunders has taught music from kindergarten to college in styles from madrigal to mariachi. Dr. Saunders is Professor of Music and music department chair at Lakeland Community College, where he also directs the Lakeland Civic Orchestra.  He held the position of Associate Professor of Music and Director of Bands at Oklahoma Panhandle State University from 2007 to 2012.  He received degrees in music from the University of Cincinnati College-Conservatory of Music and The Ohio State University.  Dr. Saunders studied composition with Donald Harris, Thomas Wells, Jan Radzynski, and Wes Flinn, and trombone with Joseph Duchi and Tony Chipurn.

His original compositions have been performed across the country, including performances at national conferences of the National Flute Association, the International Horn Society, and the Society of Composers, and he has presented his research on rhythm at conferences of the College Music Society and the Society of Composers, and at the Oklahoma Music Theory Roundtable and the Aspen Composers Conference.  His works for large ensemble have been performed by the McConnell Arts Center Chamber Orchestra (Columbus, Ohio), the Marquette (Michigan) Symphony Orchestra, the University City (Missouri) Symphony Orchestra; at Kutztown University (Pennsylvania), Denison University (Ohio), Westminster College (Pennsylvania),  Florida Gulf Coast University, Lakeland Community College (Ohio), Sinclair Community College (Ohio), West Texas A&M University, Kansas State University, and Oklahoma Panhandle State University.  His work South Africa for horn and marimba received support from the Meir Rimon Commissioning Assistance Fund of the International Horn Society, and appears on faculty and graduate recitals across the United States.  His Azteca Dances for woodwind quintet, after a successful premiere by the Solaris quintet in Cleveland, was performed by faculty at High Point University (North Carolina) and by the Wind Speaks ensemble at the University of Oregon.  He received the 2007 Ruth Friscoe Prize for composition, was the Oklahoma Music Teachers Association 2011 Commissioned Composer (for his Piano Sonata), and is the recipient of three ASCAP Plus Awards.

He was elected to the Cleveland Composers Guild in 2012, and currently serves as secretary of that group.  With B.J. Brooks, he co-hosted the 2012 Society of Composers Region VI Conference at West Texas A&M University.  His collaboration with pianist Avguste Antonov has yielded performances of his solo piano works throughout the Plains and Midwest states, and led to the 2014 premiere of his Piano Concerto.  Portions of his piano cycle Starry Wanderers appear on Antonov’s 2014 CD American Journey on the Hartshorn Classical label, and Antonov premiered his piano cycle The Rainbow’s Daughter in 2017.